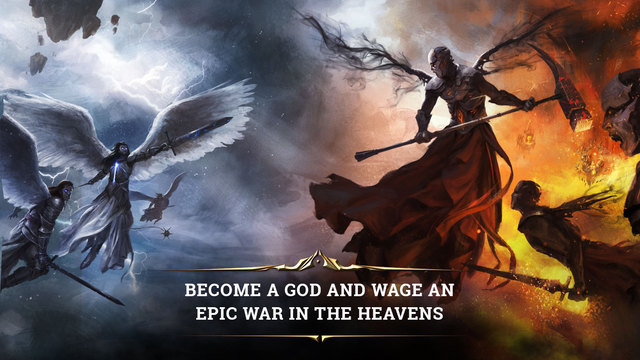 What is Sky Wars Archon Rises?

Become a God and wage an epic WAR in the HEAVENS. More than a KING, you are a DEITY in this 3D MMO strategy game!

Build an EMPIRE, raise an ARMY, and rule the SKY. Heaven awaits someone worthy enough to claim it! Play Sky Wars: Archon Rises, the best new strategy game!!
After a terrible battle set fire to the world, the throne of heaven lies empty. The last Goddess Ambriel feels you are the one of legend. Players from around the world challenge your divine right, and a dark force stirs in the world below…

↦ Build and customize your city to reveal the mystery of Archon
↦ Skill your Archangel hero to increase his power and equip him with powerful artifacts
↦ Unlock and train Gorgeous 3D combat units
↦ Raise a powerful army to defeat your enemies
↦ Strategize your actions and raise your mighty empire to glory
↦ Fight in empire and alliance tournaments to win great rewards
↦ Join an alliance, conspire and execute strategies to take over the Throne and become a Mighty King
↦Capture, tame, and control legendary Monsters and send them to battle to smite your enemies